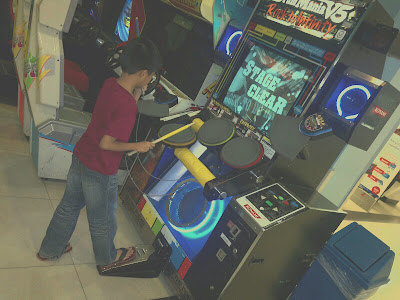 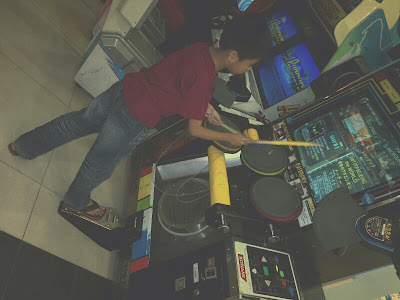 I went to the kitchen. I opened the fridge the closed it back. Once closed, I heard echoing sounds. It was like you were in a cave. Then you realised, it was time for you to stack the needs.

So I went to Tesco Kampar, a favourite place to buy most items.
As usual after swiping my tesco card, the next place would be the food court. Mostly on friday or sunday there were a lot of people, most of them trying to avoid to shop on saturday due to No Plastic Bag Campaign on that day.

We had claypot noodles for our lunch. It was not long before Danny made a special request, he wanted to play video games near the food court. He promised, it would be the last when i told him that he had played enough. I noticed something, he wanted me to play along... which meant he asked for a quality time with his father. In the name of quality time, 10 tokens for him. My son knew how to play with words so his father!

There is one video game which I feel quite interesting...the drummer.. you have to hit the drum or step on the pedal by matching them to the symbols on the screen. If you do it right, it will produce sounds that match with the tempo. It was fun, really.

I need to spend more time with him as he is growing fast.